Two siblings have been crashed to death by a speeding vehicle after the driver lost control at Ejisu-Besease on Sunday morning. 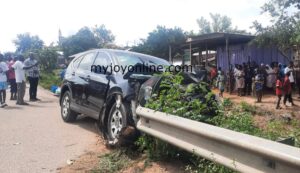 The accident is said to have occurred around 8:40am.

According to sources, the car was trying to overtake another vehicle when it veered off the road.

A third victim, Abdul Rahman Mohammed, aged 50, who sustained severe injuries, has been transferred to the Komfo Anokye Teaching Hospital.

Giving further details, eyewitnesses say the Honda CR-V vehicle with registration number AS 2221-22, which was being driven by one Justice Adjoyi, aged 33, was heading towards Konongo-Ejisu when the incident occurred.

While trying to overtake another vehicle, Justice Adjoyi, is believed to have noticed an approaching car, causing him to veer off and knock down the three male pedestrians by the edge of the road.

Currently, the entire Besease Zongo community has been thrown into a state of mourning following the death of the two men.

Family members of the victims were seen weeping uncontrollably when Nhyira FM visited the scene located just five meters away from the home of the siblings.

Meanwhile, the body of the deceased have been deposited at the Juaben Government Hospital mortuary pending an autopsy.

Also the driver, Justice Adjoyi, is in police custody, while the two accident cars have been impounded.

Ejisu Division Motor, Traffic and Transport Department Commander, ASP Francis Mireku confirmed the accident but will not give details.