Ghana Education Service (GES) and National Council for Curriculum and Assessment (NaCCA) have proposed dates to conduct the 2022 National Standardised Test for Primary 2 and Primary 4 students/learners across the country.

According to the bodies responsible for the assessment of learners under the programme, this year’s National Standardised Test (NST) is proposed to be conducted in November and December 2022 respectively.

The data available to GhEduJob.Com suggests that, GES and NaCCA have proposed to conduct the 2022 National Standardised Test for Primary two (2) students from 1st November to 30th November, 2022 and between 12th December to 16th December, 2022 respectively.

GES and NaCCA also proposed the formation of a Technical Committee to plan this year’s test which will include Primary 2 leaders/students as well, along with the Primary 4 students/learners.

This was disclosed in a meeting with Management of GES and Assessment team of the National Council for Curriculum and Assessment (NaCCA) on 24th August, 2022.

The meeting was organize to review the results of the 2021 National Standardised Test (NST) conducted for Primary 4 and to also address some challenges that confronted both Agencies so they do not reoccur in the 2022 edition.

Average scores per various Regions/Districts in both English and Maths were critically assessed to know the Districts or Regions that fell below the proficiency level. 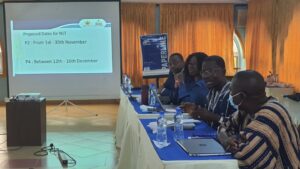 According to GES and NaCCA, the 2022 National Standardised Test will be conducted in schools close to the end of the academic year by a team of trained Test administrators and monitors preceded by; 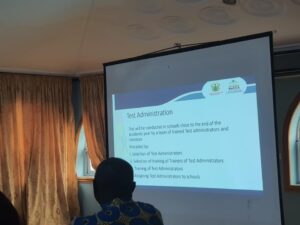 Subjects for the National Standardised Test

The following subjects shall be available to testees taking the National Standardized Test (NST) for Primary 4 and Primary 2 pupils.

Subjects for the test are:

NaCCA and GES under the Ministry of Education have set these goals to meet Ghana’s recent Education Strategic Plan, 2018-2030 which seeks to:

Among the offshoots of the Plan is the introduction of the National Standardized Test (NST) which is to measure the learning outcomes of the educational reform at the basic level.

According to plans, data collected from the National Standardized Test (NST) would inform policy review and formulation with respect to classroom teaching and learning. 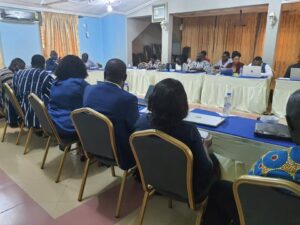 The Ahafo, Bono East and Bono regions have emerged the hub of public basic education, as pupils in those regions led in the first-ever National Standardised Test (NST) for Primary Four (P4) pupils

The results of the National Standardised Test (NST), in which almost 390,000 Primary 4 pupils from 14,883 public schools participated, showed that the three regions, which were formerly together as the Brong Ahafo Region, emerged as a strong base for lower primary education.

The Volta Region posted the least mean scores of 34 per cent in English and 27 per cent in Mathematics, according to the results made available to the Daily Graphic.

Mathematics emerged as the major challenge among pupils in public P4, the NST results indicated.

The Western and the Western North regions followed, with 96 and 93 per cent, respectively, of their pupils falling within the BB level.

The Eastern, the Upper East and the Western regions followed, with 77, 76 and 72 per cent, respectively, in the BB level.

The outcome of the test, therefore, indicates that a lot more effort is needed in the three regions to help learners at the lower primary level to catch up with their mates elsewhere. 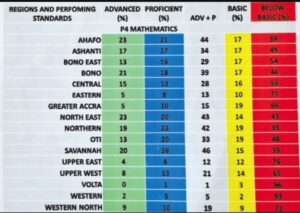 The performance of the P4 pupils is classified under four categories, according to the National Pre-tertiary Learning Assessment Framework (NPLAF), 2020.

Pupils who scored 80 per cent and above are considered Advanced (A) or high level of proficiency.

The performance of the pupils in English Language was fairly better than in Mathematics.

Fifty per cent of the pupils performed below B in English, while the other 50 per cent was made up of 15 per cent B, 14 per cent P and 21 per cent A.

The Ashanti Region firmly positioned itself as the second-best performing region in both English Language and Mathematics after the Ahafo Region, with the Bono East and the Bono regions clinching the third and fourth places, respectively, in both subjects.

The test, which was conducted on December 17, last year to determine the performance level of each pupil, was a curriculum-based competency assessment programme that reflected the entire curriculum.

The NST is for the assessment of curriculum standards, including reading, writing, arithmetic and creativity, knowledge, skills, values and attitudes that are central to the new pre-tertiary education curriculum.

Commenting on the outcome of the test, the Director-General of the National Council for Curriculum and Assessment (NaCCA), Professor Edward Appiah, said the performance was an improvement over an assessment carried out in 2015 and 2016, in which the performance in literacy and numeracy was very low.

He said the test was important to offer a targeted intervention early, so that children below the average could be helped, instead of waiting until 11 years when the child would be writing the Basic Education Certificate Examination (BECE).

“By that time, anything we would want to do would amount to wasting the child’s time. So it was decided that we try to assess them at Basic Two, Four and Six and see the level of performance, so that if there are interventions, we can provide them along the way before they reach that level,” he explained.

He added that even though the general performance was low, it was an improvement and an indication that “we will get there”, basing his conviction on the fact that, per the Education Strategic Plan 2018-2030, by the 2025/26 academic year, the national mean score for Basic Four in Mathematics and English was supposed to be 38 and 53 per cent, respectively.

The national mean scores for the just released results are 46 and 54 per cent for Mathematics and English Language, respectively.

“So if at this level we are at 46 per cent in Mathematics, even though we still think there are challenges, we can say that there has been a greater improvement,” Prof. Appiah indicated.

He admitted that there was still more to be done.

“We cannot sit down and say we are there yet,” he said, insisting that there was a whole lot yet to be done.

“All in all, I think that the country is on course. We will definitely get there, although we are not there yet,” the Director-General of NaCCA said.

For his part, the Minister of Education, Dr Yaw Osei Adutwum, said those countries that had done well in education did not wait till 11 years before undertaking any intervention.

He said even though it was late in implementing the NST, the government was currently putting in place lot of interventions in the educational system.

He said the NST also reflected increasing globalisation and interest in global mandates. 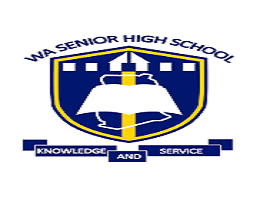